New Delhi: Many industries got severely hit by the COVID-19 pandemic. This also includes the Entertainment industry. With the implementation of the nationwide lockdown last year, the first to shut shop was the movie theatres. Though the theatres have been reopened after the lockdown protocols started to ease, it failed to get the sufficient footfall.

The year 2021 brings in an air of fresh hope for the cinema halls as many big banner movies including Salman Khan’s ‘Radhe: Your Most Wanted Bhai’, ‘Brahmastra’, ‘Pathan’ and others will hit the screens this year reportedly. There have been reports doing the rounds on social media lately that his upcoming movie ‘Radhe’ will be released on the OTT platform owing to the current uncertain situation of COVID-19.

Now, many exhibitors from across the country have requested the ‘Antim’ actor through a written statement to release his movie ‘Radhe’ in the theatres. Salman being the box office king will supposedly boost the business of movie theatres all over the country.

Reportedly, Zee has bought the rights for ‘Radhe: Your Most Wanted Bhai’ worth Rs 230 crores. The film will release in the movie theatres only.

The letter addressed to Salman read, “As you are aware, 2020 has been a rough year for millions of people across the country & the ones associated with India’s film exhibition sector haven’t been an exception. Over the last 10 months, hundreds of single screen/ Independent cinemas have pulled down their shutters permanently & this has resulted in the loss of livelihood for lakhs of people who were employed by them directly & indirectly.” 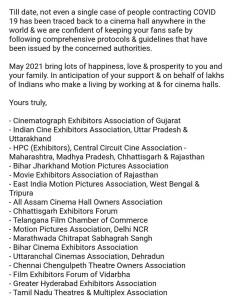 “Films are to theatres what fuel is to a car. Without a constant supply of content that is relevant to its audience, running a cinema hall is close to impossible. For over a decade now, your films have played an important role in bringing audiences to single screen cinemas, which are otherwise starved for content that caters to the sensibilities of people who patronize them”, the letter further read.

Requesting the ‘Radhe’ actor to release his movie in the cinema halls, the exhibitors wrote, “Your film Radhe – Your Most Wanted Bhai is among the few that are capable of resurrecting the fortunes of independent / single screen cinemas across the country. A film like that, if released widely can give not just financial support & relief, but also a ray of hope to owners & employees of theatres in the context of their future. We request you to plan the film’s release at every cinema in the country on Eid 2021, as there cannot be a better idea than that for us film exhibitors & more importantly for millions of your fans, whom we cannot wait to welcome back at the theatres.”

‘Radhe: Your Most Wanted Bhai’ features Disha Patani as the female lead and Randeep Hooda as the antagonist with Jackie Shroff in a pivotal role of a cop. The movie is the official remake of Korean Film, The Outlaws, and is gearing up for an Eid 2021 release in theatres reportedly.

Shah Rukh Khan Confirms His Return To The Big Screen In 2021; Wishes Everyone A ‘Happy New Year’

Delhi Riots Case 100 Suspicions Do not Make Proof Crime and...

Delhi Riots Case 100 Suspicions Do not Make Proof Crime and...