Actor Kangana Ranaut revealed in a new Twitter post that the makers of Dhaakad have roped in Tetsuo Nagata, an award-winning Japanese cinematographer based in France. She also said that a ‘highly acclaimed international action crew’ is working on the film, which she promised will be a ‘world-class spy thriller’.

Kangana Ranaut, while sharing pictures on her Twitter account, wrote, ‘For #Dhaakad we have legendary french director of photography Tetsuo Nagata, his academy award winning work like La Vie en Rose has been an inspiration for whole world. Along with highly acclaimed international action crew @RazyGhai hoping to make world class spy thriller.’

On New Year, Kangana hosted a brunch for the team of Dhaakad, and thanked them for ‘working tirelessly even through holiday season’. She shared pictures and videos from the get-together and expressed her excitement about the film. ‘Cheers to our Dhaakad team and our Chief…. our director Razy Ghai he is India’s top advert film maker, it’s his first film but so privileged to work with him, he is amazing,’ one of her tweets read.

In a teaser for Dhaakad, Kangana was seen firing a machine gun. In an earlier statement, she said that the film will be a ‘turning point’ for Indian cinema, as it is a ‘one-of-a-kind female-led action film’ being made on a lavish scale. ‘If it is received well, there will be no looking back for women in Indian cinema,’ she had said. 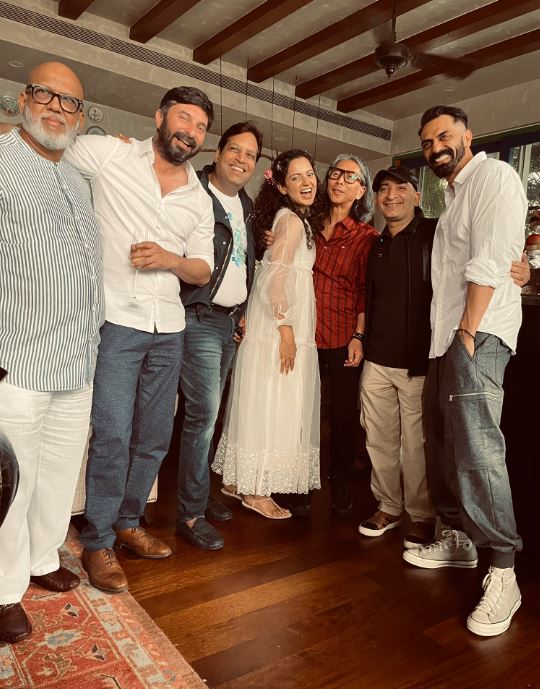 Last year, in March, Dhaakad was at the centre of a controversy, when filmmaker Ahmed Khan was quoted as saying that Kangana’s Manikarnika: The Queen of Jhansi was a flop and that Dhaakad was shelved as a result of losses suffered by makers.

Kangana’s sister and manager Rangoli Chandel lashed out at Ahmed in a series of tweets and called him an ‘atrocious’ filmmaker. The director and producer of Dhaakad also tweeted to confirm that the film was very much happening.

Later, Rangoli revealed that Ahmed called Kangana to apologise and said that he was misquoted, but they were still sending him a legal notice for claiming that Dhaakad was shelved.