The reigning queen of Bollywood, Deepika Padukone makes space for herself in the prestigious list put down by a leading magazine for their 45th Anniversary feature, which includes 45 successful personalities from different fields such as politics, sports, business, entertainment, social work.

Deepika is the only female from the field of entertainment to be featured in the list. The list also includes names such as businessmen like Kumar Mangalam Birla, Azim Premji and Nandan Nilekani, PayTM founder Vijay Shekhar Sharma, and ISRO Chairman Dr. K.Sivan, among others.

The actress took to her social media and shared snapshots of India Today’s magazine cover page and the the write up where she talks about her turning point in life that led her to this kind of a success. 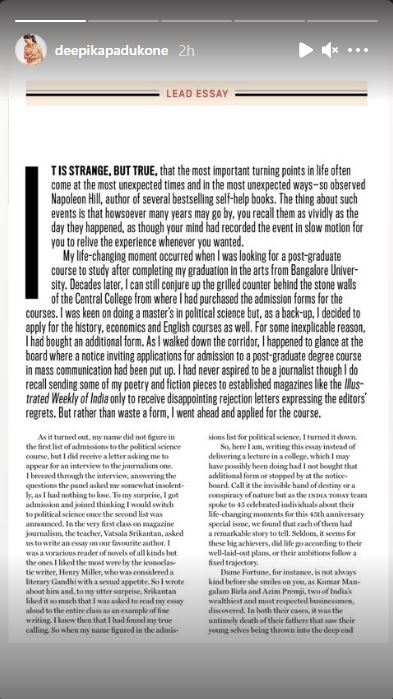 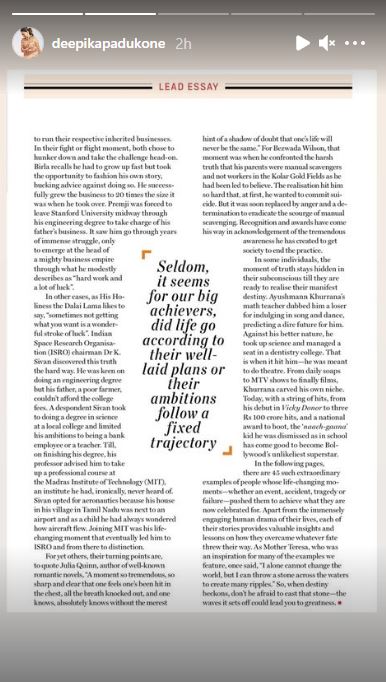 Over the span of 13 years, since her debut, Deepika Padukone has catapulted into a place where she is being revered for her career choices. From reigning the industry single-handedly to inspiring young girls to take up acting as a profession, Deepika has proved her mettle time and time again.

With multiple announcements of big-buck movies this year, Deepika’s 2020 is surely ending with a bang as she graces on the same prestigious list as so many other achievers from various fields.

With the strongest trajectory of roles in her kitty, Deepika is all set to own the box office in 2021. She will be seen in Shakun Batra’s next opposite Siddhant Chaturvedi, ‘Pathan’ opposite Shah Rukh Khan, Nag Ashwin’s next with Prabhas, ‘The Intern’ and ‘Mahabharata’.