New Delhi: Varun Dhawan and Sara Ali Khan starrer ‘Coolie No 1’ has been making waves ever since the movie was announced. This movie directed by David Dhawan is a remake of the 1995 hit movie of the same name which starred Govinda and Karisma Kapoor in the lead roles. The original movie was also helmed by filmmaker David Dhawan.

‘Coolie No 1’ Movie Review: Traumatising To Say The Least

‘Coolie No 1’ released on the OTT platform Amazon Prime Video on December 25, 2020. Reportedly, the movie became the most-watched film on the OTT platform soon after its release. Though fans were quick to watch the comedy-drama, it could not garner a good IMDb rating. The IMDb rating of ‘Coolie No 1’ stands at 1.3 narrowly beating ‘Sadak 2’ starring Alia Bhatt, Sanjay Dutt and Aditya Roy Kapur, which has an IMDb rating of 1.1. 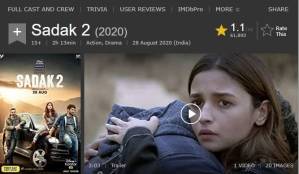 Netizens were also quick to react to the movie. See how Twitteratis felt about the Varun-Sara starrer remake.

Other than Varun and Sara, ‘Coolie No 1’ also stars Paresh Rawal, Rajpal Yadav, and Javed Jaffrey in pivotal roles. This movie also marks David Dhawan’s 45th film as a director and has been bankrolled by Jackky Bhagnani, Vashu Bhagnani, and Deepshika Deshmukh.